Photo of Local 27 Carpenters Union on strike, taken May 19 at Mirvish Village in Toronto. [ PHOTO: ELIZ]

Megan Kinch is a union electrician who works construction in Toronto. What follows is her take on the complexities of a strike with many unions and many intertwined issues—and how none of it lessens worker solidarity.

THE CONSTRUCTION SECTOR in Toronto is in the midst of a wave of frantic contract negotiations, strikes, and picket lines. With inflation kicking in and many Toronto construction workers priced out of entering the local, or reasonable commuting distance, housing market construction workers are asking for more pay in the midst of an extremely profitable building boom for developers and builders.

This year many of the contracts are expiring at the same time, and there are overlapping strikes and negotiations with many trades. It can be a bit dizzying to try and keep track of it all. But, as complex as it is, there is significant cooperation across different unions.

Many unions make up the unionized construction landscape but there is significant cooperation across different unions. Some of the most significant unions include:

Furthermore there are different contracts within those trades and unions, with residential and ICI (institutional/commercial/industrial- think big buildings) sectors having different agreeements  and issues. And for example, LiUNA local 183 generally does residential, with local 506 doing more ICI, and demolition as a separate contract within 506.

Also, there are some disputes between unions as to what work specifically belongs to which trade( jurisdictional disputes ). Some unions are affiliated with the CLC or Central Ontario Building Trades, some are not, plus the TTC has its own unions for TTC work except when other union workers work on new construction, railways are their own separate entity except when they are not..etc.

Construction sites have many layers

Construction sites are complex places with layered work: one trade often depends on another trades work in order to being or complete steps of their job. If the crane operators are on strike carpenters cannot get the wood they need lifted up to where they need it. If demolition labourers go on strike, old buildings cannot be cleared to make room for renovations. With so many contracts coming up at the same time, most worksites across the city are experiencing at least some degree of disruption which puts pressure on the industry as a whole.

In general, wages and hours are the big issue. Wage increases have often been small in recent years, even as housing costs have skyrocketed, and workers want to be able to maintain a decent standard of living. Hours of work are a huge issue, because it affects not only time off but also overtime pay, making work hours a pay issue as well.

UA46 has been working four day work weeks for some time, for example, but are under pressure to return to a five day work week, which many plumbers and steamfitters say will significantly affect their work/life balance, as well as possibly having huge impacts on the amount of overtime pay.

Safety is always a major issue in construction, as is the provision of PPE by employers. 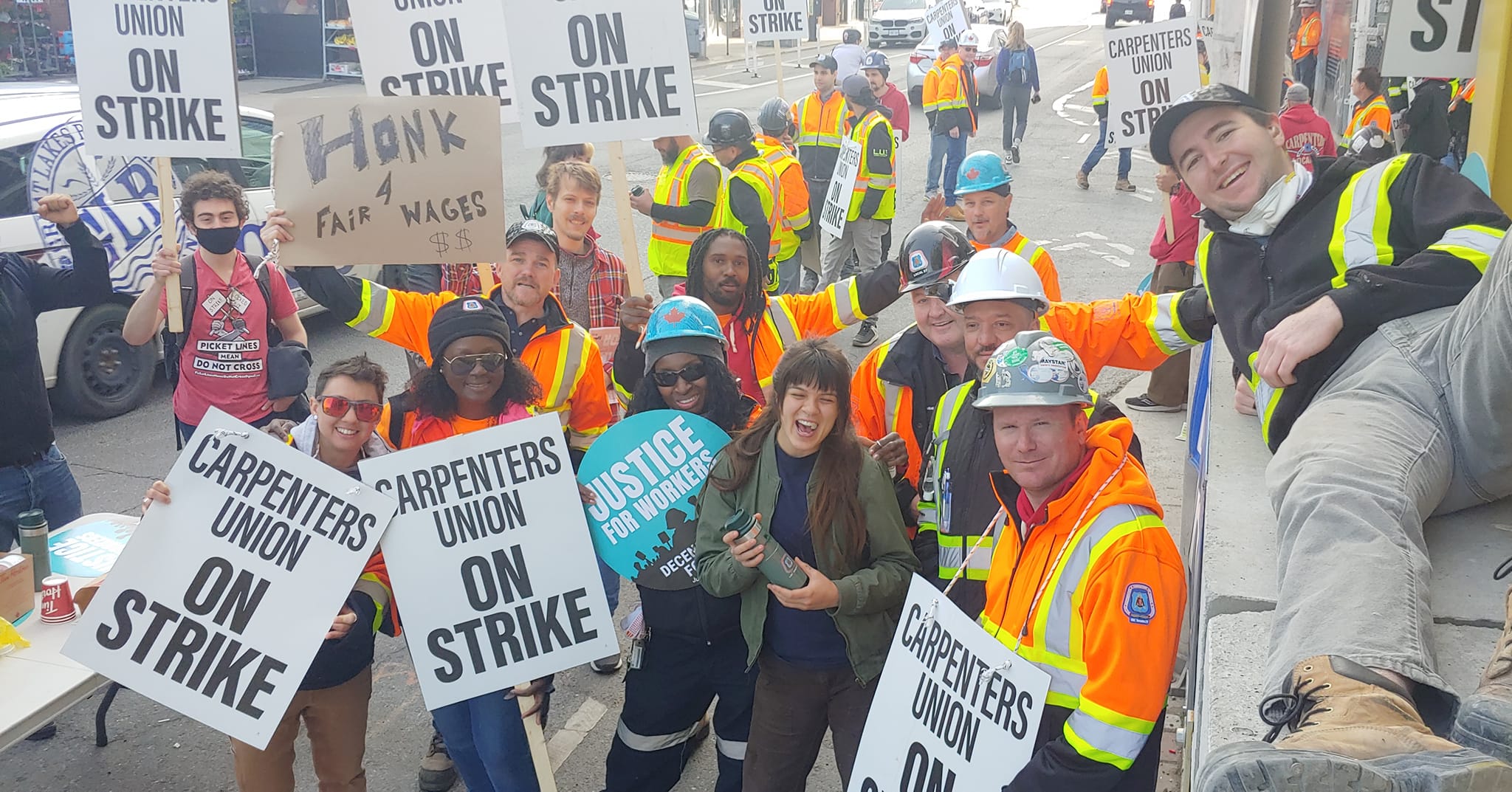 Despite all the trade differences and their special issues, there is significant solidarity across trade unions at all levels from the top, right down to the rank-and-file workers. Although occasional conflicts arise between unions over work, generally there is a feeling that construction workers are all in this together. In my experience, workplace conflicts between individual workers over union differences are a thing of the past in Toronto workplaces.

During this uneven wave of strikes, workers are often in a position where one union is on strike while others are continuing to work. This causes an agonizing decision for some workers as to whether to cross a picket line or not: officially one is supposed to cross the picket line of another union to get to your work if you are yourself on strike, and that’s the guidance that comes down for union leadership (constrained by legal frameworks).

Hate to cross a picket line

But unofficially it hurts the union feeling of many workers to cross a picket line. Workers deal with it in different ways. Some people have felt unsafe or ill and not crossed. At a picket line I visited, several union workers ended up deking out the pickelines and climbing high fences around the back of the site in order to avoid the awkwardness of officially crossing the line. This is not recommended!

A much better idea is the practice of many workers who walked through the lines fist-bumping their fellow workers in solidarity, buying them coffee and donuts and talking to them about their issues and negotiations.

There have also been isolated incidents of solidarity walkouts, with some workers for Local 30 (sheetmetal, roofing, siding) and Local 46 (plumbers/steamfitters/welders) walking out in the midst of the work day in solidarity with labourers from LiUNA 506.

Such beautiful grassroots expressions of solidarity are not condoned by the official unions themselves, but are an example of the collective feeling of construction workers that an injury to one is an injury to all.

Megan Kinch is a union electrician and freelance writer living in Toronto. You can find her on Twitter at @meganysta.