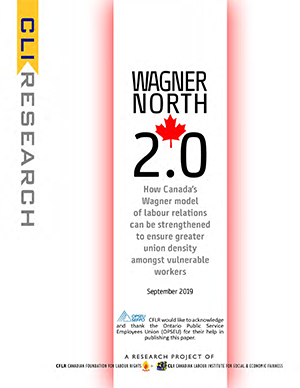 Wagner North 2.0: How Canada’s Wagner model of labour relations can be strengthened to ensure greater union density amongst vulnerable workers examines the current state of the very foundation of Canada’s system of labour relations, the Wagner model. When it was first established (in the US in the 1940s), it was premised on full time workforce employed primarily in the manufacturing sector and the public sector. Today, that model still works relatively well in the public sector, but not so well in the private sector where precarious work is growing, jobs are less secure, and old industries are shrinking or heading overseas.

This paper argues that the Wagner model has delivered in providing unionized workers with well-established collective bargaining rights, but it has not been effective in increasing union density within the growing precarious and insecure workforce. It also explores a strategy on how the labour movement can build support for a stronger and improved Wagner model aimed at increasing union density amongst workers in less secure jobs. (CLI/Canadian Foundation for Labour Rights, coming May 2019). 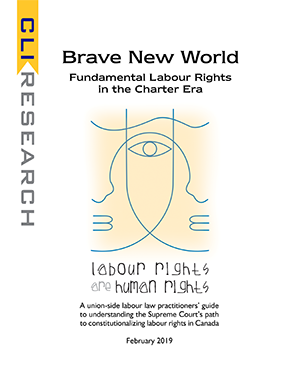 Brave New World: Fundamental Labour Rights in the Charter Era provides analysis of three decades of labour rights decisions of the Supreme Court of Canada under Section 2(d) – freedom of association – of the Canadian Charter of Rights and Freedoms. It narrows in on the Court's 2015 series of three decisions, now known as its 'Third Labour Trilogy', which for the first time in Canadian history, gave the labour rights of workers constitutional recognition and protection from government interference It also lays out a strategy on how the labour movement can build on those decisions to advance progressive labour law reform across the country. (CLI/Canadian Foundation for Labour Rights, February 2018) 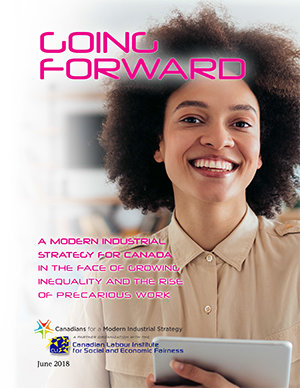 Going Forward: A Modern Industrial Strategy for Canada in the face of growing inequality and the rise of precarious work is a foundational piece for Canadians for a Modern Industrial Strategy (CMIS), a partner organization of CLI. The paper advocates a change from the laissez-faire approach to Canada’s economy to a planned long-term strategy based on the input from stakeholders such as governments, labour, business, civil society and academia.

The time is right to make bold changes to economic planning and specifically to build and redefine union power. This paper offers recommendations on how to challenge inequality today through progressive taxation and redistribution as well as protecting and enlarging public services. (CLI/Canadians for a Modern Industrial Strategy, June 2018) 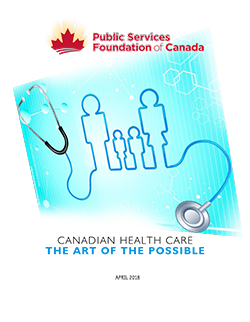 Canadian Health Care: The Art of the Possible looks at eight European countries for inspiration. It examines health outcomes from a variety of perspectives, always looking for ways and practices that we could learn from, and which can be easily implemented here in Canada.

We believe this is much more useful than the endless comparisons of our Medicare system with the for- profit US health care system. Such comparisons offer no comfort to the millions of Canadians who rely on Medicare. (CLI/Public Service Foundation of Canada, April 2018) 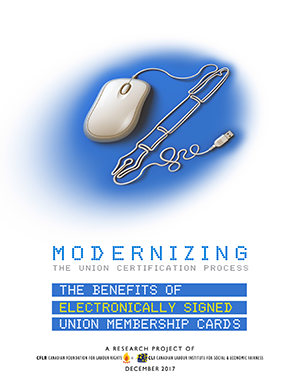 Modernizing the Union Certification Process: The Benefits of Electronically Signed Union Membership Cards advocates for the allowance of electronic signatures as proof of an employee’s interest in joining a union during a union organizing drive.

The research paper concludes that given advances in computer software technology, the basic requirement of having to provide evidence of support for joining a union can easily be met electronically. It’s time for Labour Relations Boards across Canada to catch up with this technology and use it as a way to remove one of the many barriers that workers currently face when trying to join a union. (CLI/Canadian Foundation for Labour Rights, December 2017) 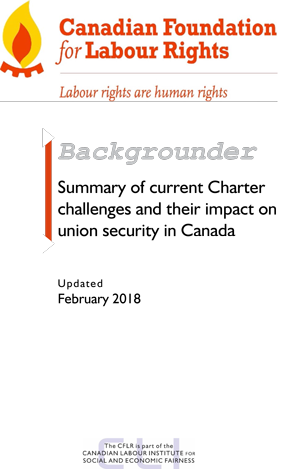 The 2018 edition of the Backgrounder provides summaries of some 14 Charter challenges initiated by unions that are currently before the courts. Four of the challenges are against anti-worker laws that were passed in 2017. The other Charter challengers outlined in the Backgrounder provide updates on 7 active cases before the courts, as well as 3 cases which were closed in 2017. (CLI/Canadian Foundation for Labour Rights, February 2018) 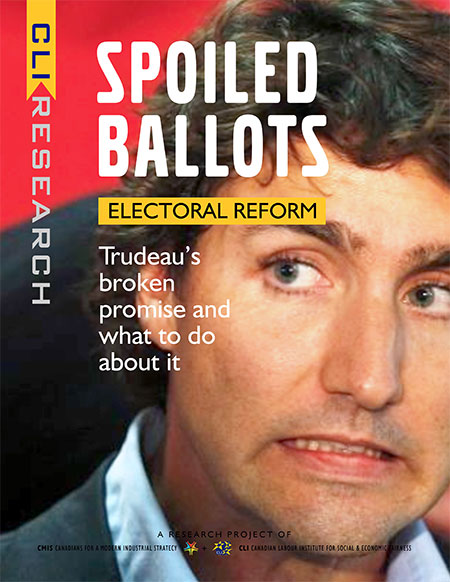 SPOILED BALLOTS: ELECTORAL REFORM: Trudeau’s broken promise and what to do about it provides an analysis of the federal electoral reform process since 2015. It concludes that parties who do not benefit from electoral reform (liberal and Conservative) will not adopt a proportional representation electoral system. Parties that would benefit (NDP and green) would be much more likely to do so. (CLI/Canadians for a Modern Industrial Strategy, April 2019) 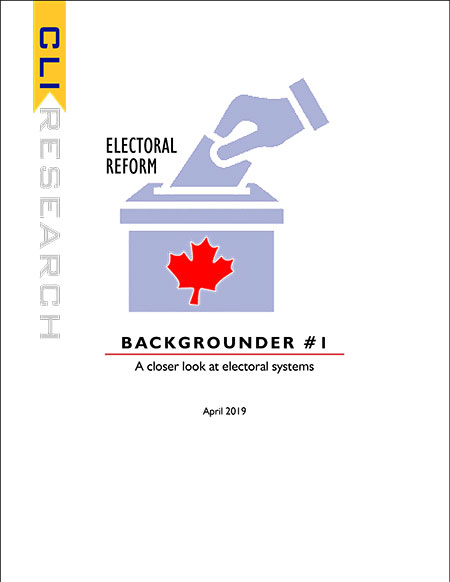 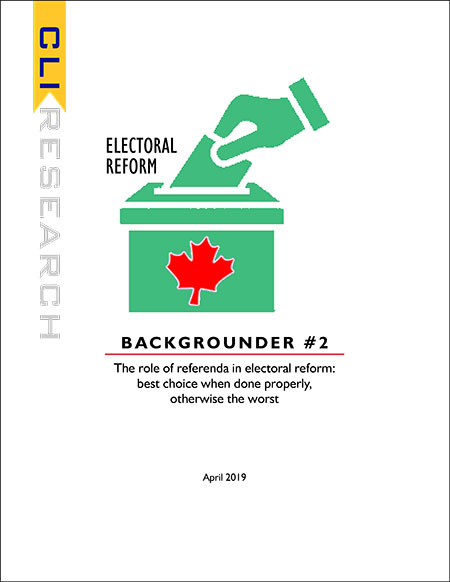 ELECTORAL REFORM: Backgrounder #2 The role of referenda in electoral reform: best choice when done properly, otherwise the worst. This backgrounder explains key characteristics of referenda. It focusses on how they can easily be manipulated to favour the status quo. that is why they are used by governments who are pressured to address electoral reform. (CLI/Canadians for a Modern Industrial Strategy, April 2019) 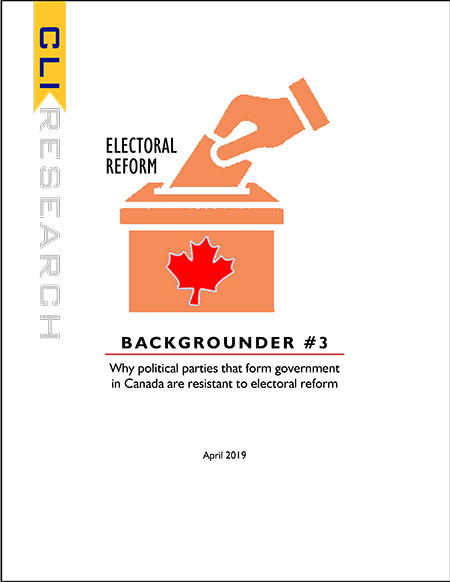 ELECTORAL REFORM: Backgrounder #3 Why political parties that form government in Canada are resistant to electoral reform. This paper explains why the Canadian parties that form government are very motivated to keep the current First-Past-the-Post electoral system. this system gives Canadian Prime Ministers incredible power. Changing it to a proportional system significantly dilutes that power. (CLI/Canadians for a Modern Industrial Strategy, April 2019) 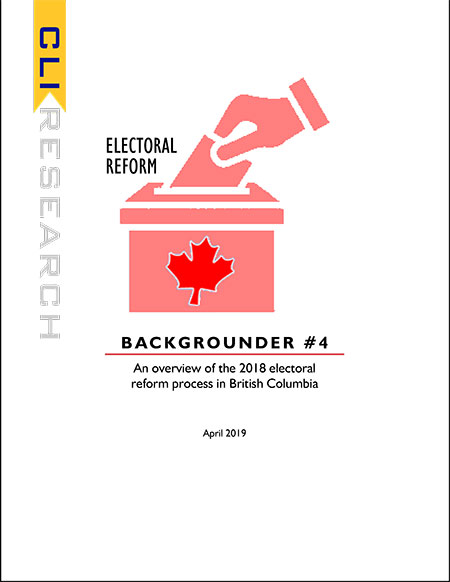 ELECTORAL REFORM: Backgrounder #4 An overview of the 2018 electoral reform process in British Columbia. This backgrounder demonstrates that the British Columbia referendum on electoral reform was designed to fail. On the surface it appeared to be fair, but by keeping information low and identifying the status quo option on the ballot, it was all but guaranteed to fail. (CLI/Canadians for a Modern Industrial Strategy, April 2019)

The following papers were prepared under the auspices of the CLI’s Student Internship Program. The Institute provides support to graduate and senior undergraduate students of labour studies, political science, public policy and law so they may undertake research projects that will assist in the development and promotion of progressive public policy aimed at achieving social and economic fairness for all. 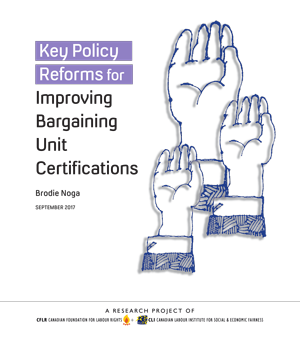 Key Policy Reforms for Improving Bargaining Unit Certifications explores those sections of labour laws that set out how workers are permitted to organize. It reviews the significant and restrictive reforms made to the certification process governing union organizing over the past couple of decades and explains how these legislation restrictions have become major barriers for workers who want to join a union. The paper concludes with solid recommendations for reforming the current union certification process across the country to make it fairer and more balanced.

The results show that implementing or maintaining card check certification and ensuring that there are adequate unfair labour practices (ULP) protections in place are the two legislative changes that have the greatest impact on certification efforts. However, as the paper points out, legislative reform alone cannot reverse declines in certification applications, and union activists must also seek to improve the public perception of unions among non-unionized workers. (Brodie Noga for CLI/Canadian Foundation for Labour Rights, August 2017) 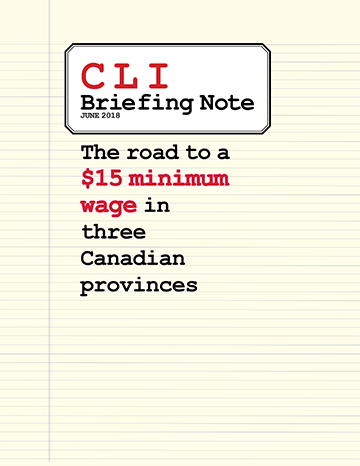 The Road to $15 in Three Canadian Provinces gives a clear snapshot of the different paths three provinces – BC, Albert and Ontario - are taking to get there and suggests a $15 minimum wage for all may soon be “an idea whose time has come. Alberta was the first province to bring in a $15 minimum wage first in October 2017 and preliminary results show it to be a huge success and help stimulate a rebound in the economy.

But the fight for workers’ fair wages isn’t over. For minimum wage earners in BC, the three-year time frame to achieve increase to $15 means people will spend years earning well below the living wage. And one of the first actions of the new Doug Ford Conservative government in Ontario was to cancel the planned hike to a $15 minimum wage which was scheduled to take place this year. (Holly McKenzie-Sutter for CLI/Canadian Foundation for Labour Rights, June 2018) 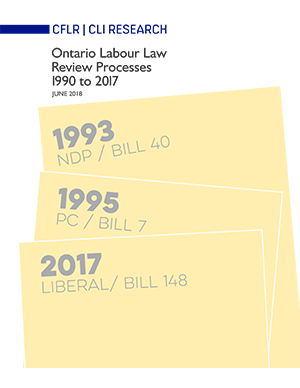 Ontario Labour Law Review Processes: 1990 to 2017 provides a comprehensive analysis and evaluation of three different labour law review processes which took place in Ontario since 1990 and which resulted in major changes to labour law, manifested in three pieces of labour legislation:

It examines the effectiveness and thoroughness of each of the labour law reviews, the processes they followed, the role of stakeholders including unions and business organizations and how they were involved in these processes, the outcomes of the reviews, and most importantly, the impact each had on the labour movement. (Chris Grawey for CLI/Canadian Foundation for Labour Rights, June 2018) 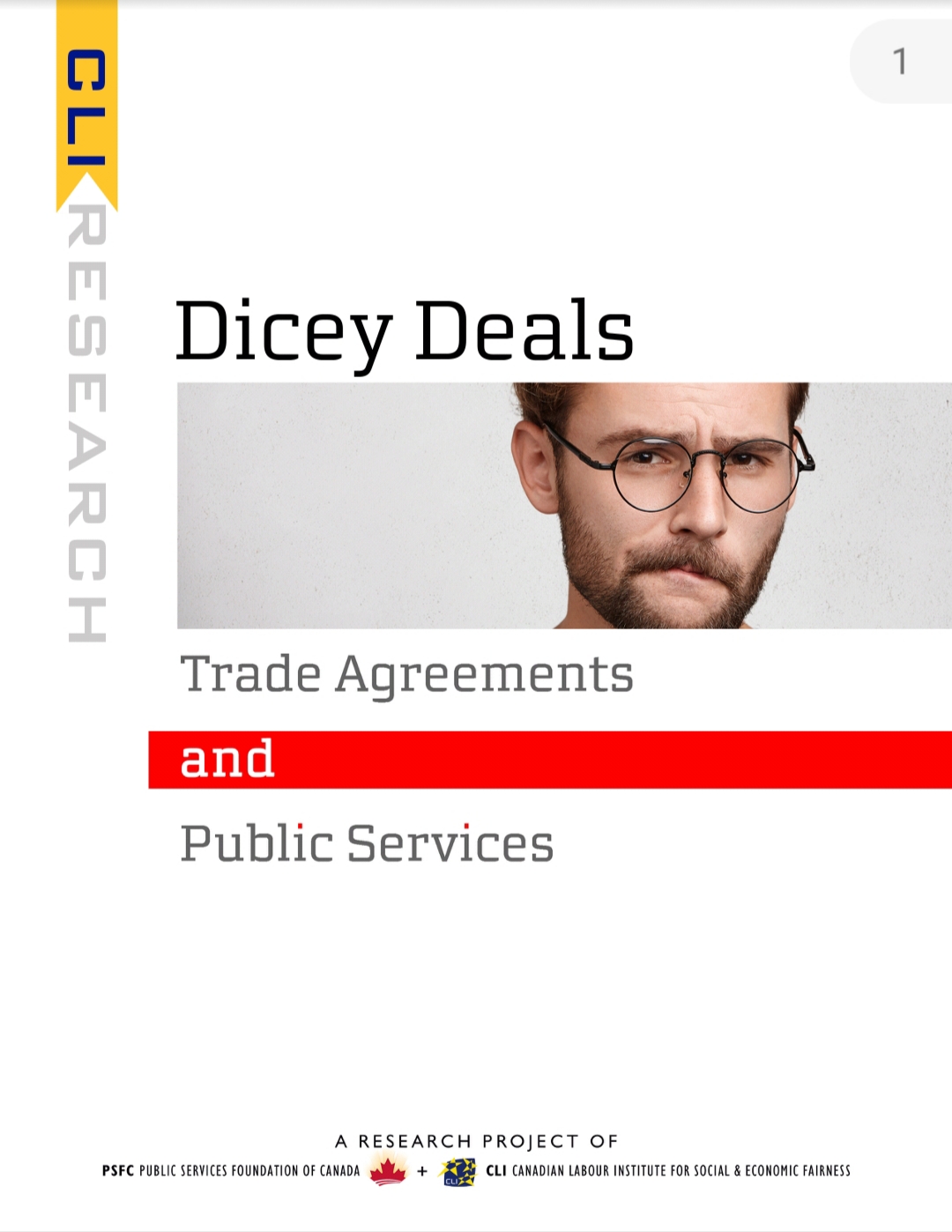 Dicey Deals: Trade Agreements and Public Services provides an analysis of the links between trade liberalization and public and social services in Canada. It outlines the inadequate protection for public services found in trade and investment agreements which often leads to privatization and, in some cases, to foreign-investor takeover of public services. The paper also provides a case study of trade impacts on the Canadian health care system.

It concludes with a strong and vigorous call to defend public and social services in Canada. (Nadia Ibrahim for CLI/ Public Services Foundation for Canada, December 2018). 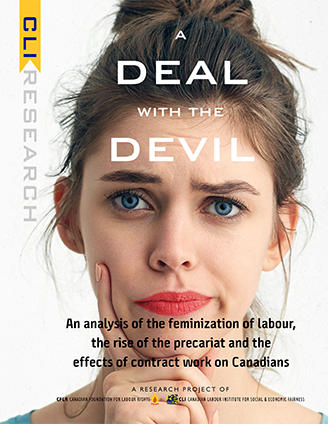 Deal with the Devil An analysis of the feminization of labour, the rise of the precariat and the effects of contract work on Canadians provides an overview of interdisciplinary literature on the changing nature of work. Its objective is to examine the increasing feminization of Canadian labour with specific focus on the preponderance of contract work in both so-called low-skilled jobs and jobs traditionally viewed as professional. The paper suggests the devaluation of work stems from the neoliberal policies of the 1980s that abandoned social welfare in favour of privatization and austerity measures. By examining work devaluation, the paper addresses the widespread phenomenon of contract work and acknowledges it as a common challenge among different kinds of workers, pointing to the need for policies and strategies that better serve Canadian labour as a whole. (Sophie Webb for CLI/Canadian Foundation for Labour Rights, October 2018)