Skip to main content
Talk Back to the Boss

THE CBC HAS GOT TO QUIT FAKIN’ IT. That’s the message hundreds of CBC staff and thousands of Canadians are sending out to CBC management.

Almost 17,000 Canadians have joined forces with more than 600 current and former employees and a public broadcasting advocate to pressure CBC/Radio-Canada into abandoning Tandem, its new branded-content advertising program.

The rebellion in the ranks is growing despite an announcement by management that it would put limits on branded content, including restricting it to digital platforms.

Several groups have formed and are directing their protests at corporate executives, the board of directors, the federal broadcast regulator and/or Heritage Minister Steven Guilbeault.

The Canadian Media Guild, CWA Canada’s largest Local, represents thousands of CBC workers. The union wrote to Guilbeault to object to a policy of airing “paid advertisements masquerading as real news”; and to the practice of using the work of journalists to produce advertisements that “look and sound remarkably like the journalism our members deliver to Canadians every day.”

“At a time when it’s critical for the public to rely on trusted news sources, sponsored content blurs the lines between real, independent journalism and ‘fake news’.”

No to ‘ads disguised as news’

The largest protest group, with more than 500 members, launched the StopPaidContentOnCBC.ca website and a Facebook page in early December. The website declares itself to be part of: “a determined effort by CBC journalists past and present to protect the integrity of CBC journalism from ads disguised as news.” 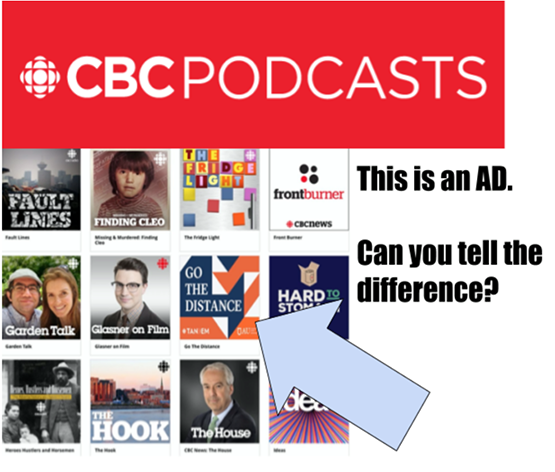 The union letter says the “CBC is using its resources to help advertisers trick Canadians. They call what they produce ‘paid content’. And it’s insidious. It looks and sounds like the news stories and podcasts we produce. It’s found on the same websites and apps. But it’s not news, or even information. It is advertising that pretends to be news. And we believe strongly it must stop.”

The CBC said it would “leverage the credibility of the network” when it launched their paid content programing in September.

CBC staff say “that reputation was built by people like us — generations of journalists who earned your trust by informing you faithfully and truthfully every day. ‘Paid content’ does not leverage that reputation, it makes a mockery of it. In an era of ‘fake news’ where misinformation is already rife, it undermines trust. That is dangerous.”

Hundreds had signed the Canada Media Guild open letter by early December, on top of the 16,500 people who had already signed an online petition in English and French run by Friends of Canadian Broadcasting.

The National Post reported that another open letter demanding a stop to Tandem has received support from more than 100 Radio-Canada staff, including hosts of primetime TV and radio news shows. It is directed to Michel Bissonnette, the executive vice-president of French services.

Another group of 35 prominent former employees, including former Canadian governor general Adrienne Clarkson, has sent a letter to the Canadian Radio-television and Telecommunications Commission (CRTC), asking it to investigate Tandem.

The CRTC says it is considering the requests to “investigate” CBC/Radio-Canada’s use of branded content.

If the CRTC agrees to investigate, the probe would be included in licence renewal hearings scheduled for January.