IN THE END BLACK LIVES DIDN’T MATTER. Even though the judge took an hour to outline how they should. In the end, Black lives didn’t seem to matter at all— certainly not enough to jail a white boss convicted of an attack on a Black man working for him.

Shawn Wade Hynes shot the then 21-year-old Nhlanhla Dlamini in the back with a nail gun on Sept. 19, 2018 at a construction site in Abercrombie, N.S. Hynes was tried and convicted of criminal negligence causing bodily harm and assault with a weapon.

The whole province waited 18 months for Hynes to be sentenced on April 23.

There was so much public interest in what sentence a white man would get, for a violent attack on a Black youth, that Judge Del Atwood decided to live stream his decision on the Courts of Nova Scotia website.

Judge Atwood knew how much was at stake. He took almost an hour to set the stage for his decision.

Judge Atwood talked about anti-Black racism. He said: “Nhlanhla Dlamini is black. The history of anti-Black discrimination in Nova Scotia is a historic fact, which is continuing. Discrimination and intimidation of racialized and marginalized persons will occur in many locations, including workplaces and it happened to NH.”

Judge Atwood talked about workplace violence. He said: “There is a strong need for the denunciation of workplace violence, motivated by implicit bias. Violence of this nature in the workplace operates to perpetuate structures of inequality and access to employment for communities that have experienced generations of formal and informal discrimination.

Jugde Artwood talked about how serious the crime was. He said: “I find that imprisonment is required in this case.”

Then, Judge Atwood sentenced Shawn Hynes to almost nothing at all, to stay at home for 18 months. No hard time. No jail time at all. Nothing more than “house arrest”, the equivalent of a daily curfew. No pain. No suffering. No real upset.

Angela Bowden was one of thousands who couldn’t believe it. 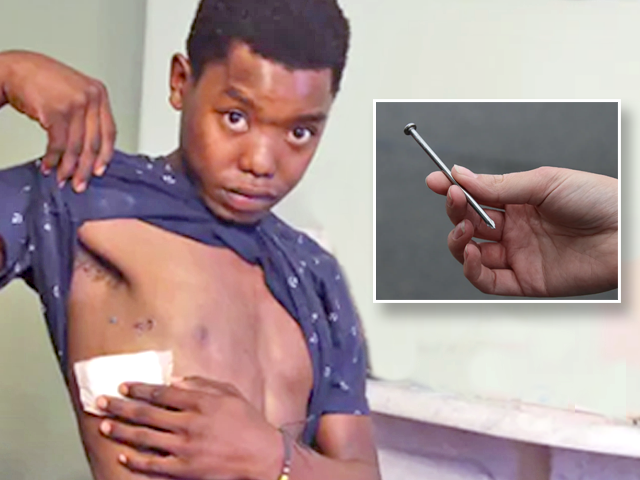 Nhlanhla Dlamini shows where the nail hit him. Inset show size of framing nail used in the attack,

Bowden is a prominent Black Lives Matter activist and author in Nova Scotia. She posted an article on the court decision on the Nova Scotia Advocate website on April 25. She writes about the injury and insult and deep, deep, deep disappointment the decision brings to Black folks in Nova Scotia. What follows are excerpts from her article.

“Today we saw a justice system perform magic and turn an intentional and malicious act into an out-of-character isolated incident. How daring was that move? Sentencing reflected  the best interest of the perpetrator, accepting that he was a good guy who made a bad choice."

“It is indisputable that Shawn Hynes bullied Nhlanhla the entire three weeks of his employment. Consider his position of authority over a vulnerable Nhlanhla and his protected characteristic of race; this was previously proven and satisfied through the Nova Scotia Human Rights Commission.”

“The entire system that employed,  prosecuted, investigated, and sentenced Shawn Hynes aligned white privilege with white justice. Hynes’ crimes were cushioned by his best interests (potential rehabilitation and trauma), while it paid lip service to the actual trauma he caused his victim.”

“A conditional sentence that allows Shawn Hynes to continue working and remain free in society is the biggest insult to these hateful and heinous crimes. Covid-19 has us all restricted, yet he is able to work and collect EI if he is laid off, and is free to be home and spend time with his loved ones regularly, having no visitor restrictions. That’s not denunciation, that’s regular life.”

“Shawn Hynes clearly demonstrated the danger he poses to Black folk. After all, he believes, in his own words, that “everyone should own a Black person”, his ideology targeted Nhlanhla violently, revealing his true character and motives. He clearly thought Nhlanhla was beneath him and his life disposable.”

“In Nova Scotia we ignore the proof and recreate a softer narrative for white perpetrators. And still justice eludes us, while pro-whiteness flourishes to harm another generation!”