WOMEN ARE TAKING IT TO THE STREETS AGAIN. The third annual US women’s march is set for January 19. The 2018 march was the largest demonstration ever in the USA. Canadian women held their own marches in 2018 and will do the same again this year all across Canada from Parliament Hill to major cities, small towns and tiny villages like remote Sandy Cove in Nova Scotia. 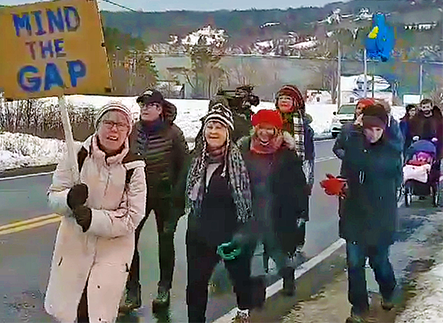 The women’s movement in Canada has in recent years chalked up some major victories:

All great achievements, among many more won by countless women who would not be stopped, who would not be intimidated whatever the odds. Their impressive gains show what can be achieved by collective effort. But they are all only milestones on a road that winds on and on—and remains full of obstacles.

The open, brazen and relentless defence and promotion of anti-women celebrities, politicians and policies by the Trump administration in the USA reminds Canadian women that nothing is settled. Victories can be undone as quickly here as they have been in the US, while new ones—like a universal National Childcare Program, advocated without result since the 1970s—remain stubbornly elusive.

In Canada, despite notable advances in access to education, significant social barriers remain in place even today for women and girls. A significant gender pay gap persists. Violence against women is a major social problem, personally touching half of the female population.

The prime minister Trudeau describes himself as a “feminist,” and, at least to some degree, has championed women’s equality in both word and deed (although his government’s record is far from unblemished). But his lead is no where close to the rule for all political leaders in Canada.

In Ontario, Premier Doug Ford has abolished an expert panel giving policy advice on violence against women. He is on record as opposing current “bubble zones” around abortion clinics to protect women from harassment (Alberta opposition leader Jason Kenney is on the same page). Ford has also hinted about action on further restrictions on a woman’s right to choose—including the possibility of legislation giving parents the power to block a teenage daughter’s abortion.

This coming year Margaret Atwood will be releasing a sequel to The Handmaid’s Tale, that epic futuristic novel about the enslavement of women. Judging by the current chilly climate, it seems to be timely indeed. The march continues, as it must—and there’s a long and bumpy path ahead.