“It’s bullshit!” she says. “Women make less than men but we pay more for everything because marketers tell us we’re not good enough the way we are and we need something ‘special’ to improve us.

“We can’t use the ‘ordinary’ stuff men use. But, in fact, there is NO DIFFERENCE between the products with the pink packaging and the one’s with the blue, except the colour.”

The Pink Tax is the name given to the practice of charging women more than men for the same products and services. It can be as high as 50 to 100 per cent more, as is the case for dry cleaning, but the average Pink Tax premium is 43% in Canada, for items that everyone uses like deodorant, shampoo, soap, and razors.

In some cases it shows up in higher prices. In others, it means women get much less product for the same price. Either way, it’s blatant discrimination.

Add it all up, and women each pay over $1,300 more every year, on average, than men pay for the same products and services. 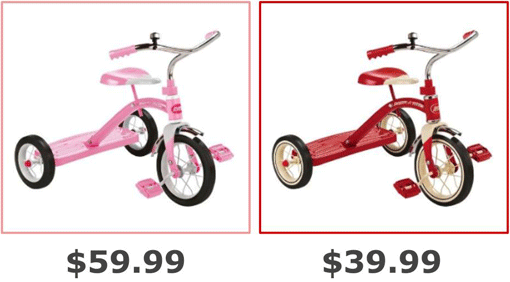 Take for example an anti-fungal cream made by Bayer that is marketed to women as a product for treating yeast infections, and to men as a cream to control athlete’s foot. Consumers could be forgiven for expecting that a cream used in the vaginal area might be formulated differently than one used on the feet. If this were true, it might justify a different price. But it’s not true.

Bayer is quite willing to admit that both products contain exactly the same ingredients packaged in tubes exactly the same size. The only difference is the colour on the labels and the description… oh, and did we mention the price? The cream for women is sold for up to 21 per cent more.

Dan Shaw, professor of marketing at Dalhousie University in Halifax, sees this as extremely problematic. “It’s pure price gouging. It’s price discrimination. In the case of anti-fungal creams, it’s something you need.”

Erum Khan’s sister, Meenu, believes that companies get away with this because of how we’re all taught to think of women. “We learn to think of women as more delicate than men so when we see a pink product, whether it’s razors or a cream, we think it’s specially formulated for women’s sensitive skin, which we’re all taught to think we have. In fact, it’s a trick. They’re all the same. We’re not getting anything special or even different.”

Governments in on it

But it’s not only manufacturers and retailers who are in on the game, it’s also the government.

The Pink Tax was supposedly abolished by the federal government in 2015. And yet they continue to make millions via the “tampon tariff”—which makes life needlessly complicated for importers and more costly for women. It just adds one more layer of profiteering on the items women need in their everyday lives.

GirlTalkHQ found a novel way to test the acceptance of this form of gender discrimination in pricing. The website worked with a Toronto coffee shop, Tokyo Smoke, to re-price their menu items. The re-worked menu charged $2 for a drip coffee for men, and $3.50 for the same coffee sold to women. Customer outrage was quick and vocal. Even the men complained about the blatant inequity in the pricing.

“I thought we were past that,” said one obviously perplexed male customer.

So if it’s wrong in a coffee shop, why isn’t it wrong everywhere?

Elizabeth Allsopp thinks the problem is partly that many women have no idea the Pink Tax exists. “I didn’t know this was happening. Women have less income to spend but we do more of the shopping. It’s just not right.” 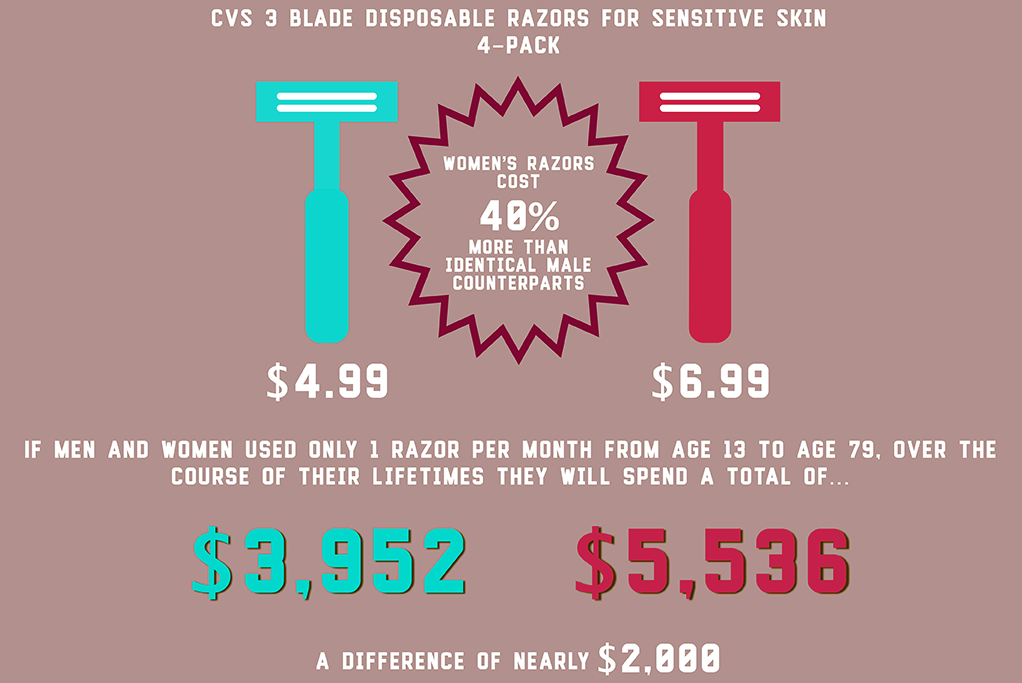 What are we going to do about it?

Erum Khan thinks that women should just stop using ‘“women’s products” and start using men’s. “The ‘male’ razors work better than the ‘female’ razors anyway,” she said. “I am going to buy Artic Thunder deodorant! If that’s a scent.”

But her sister, Meenu, and Liz Allsopp have a problem with that approach. As Allsopp pointed out, “It limits our choices. What if someone likes the ‘women’s’ scents better? Or the ‘women’s’ colour schemes? Why should we have to pay more for that?”

Meenu Khan agrees. “There’s nothing that actually links being female to Vanilla or Lavender, any more than there’s anything particularly male about Pine or Arctic ice. We should all be able to choose the scents and colours we like without being unfairly charged for it.”

Allsopp thinks we should start educating each other. “I’m going to talk to my daughters about it. I’m going to have a talk with my pharmacist. I think we need to spread the message far and wide that we are being unfairly targeted with higher prices than men pay.”

Aviva Maxwell of Montreal has an even more ambitious strategy. She is hoping to launch a class action lawsuit against the companies that make the products and the retailers that sell them.

Her lawyer, Michael Simkin says the Pink Tax is discriminatory toward women and difficult to root out because often the products are sold in different sizes or amounts so it’s hard to make comparisons.

“The fact this affects so many people – everybody buys shampoo on a monthly basis… all of these different products, and yet how they continue to differentiate based on the sex of the consumer is amazing,” he told CBC News.

“I say ANARCHY,” answers Erum Khan. “Women should not have to put up with this.”