Workers rally outside the Amazon operation in Minnesota December 14

SOMALI WORKERS IN MINNESOTA HAVE CRACKED THE AMAZON WALL. They have gotten Amazon to negotiate with them. It’s something no other workers have ever been able to do.

But the Somali-American workers want more than words. They held a rally outside the Amazon operation in Shakopee, Minnesota on December 14 to reinforce that point.

The September discussions between Amazon officials and leaders in the East African community focused on workplace conditions that, among other things, have workers fearing for their jobs and uneasy about religious accommodation.

“We are not asking Amazon to cater to East African workers,” said Abdirahman Muse, community activist. “We are just asking them to treat workers humanely.”

In November, Amazon made some concessions in response to the East African group’s concerns about productivity expectations.

Muslim employees are allowed to take prayer breaks, but still must meet their goals. “It’s very achievable, even if an associate opts to take a prayer break,” according to an Amazon spokesperson. Something the workers dispute.

Amazon’s giant fulfillment center in Shakopee employs more than 2,500 workers. Amazon estimates that about 30 percent of workers there are East African. Many of them are bused in from a neighborhood in Minneapolis, which the locals call “Little Mogadishu”—a reference to the capital of Somalia. Minnesota is home to more Somalis than any other state in the USA.

The workers say Amazon has raised its production expectations to unrealistic levels and have harsh working conditions that cause too many on-the-job injuries, especially during the holiday rush. The workers also called for more promotions of East Africans and called on Amazon to stop selling products that promote hatred and bigotry.

Abdukadir Ahmed Hayir, of Minneapolis, has worked at the Amazon facility for more than a year. During that time, he said the number of boxes he’s expected to pack has increased by 50 percent. According to the New York Times, Amazon requires workers to pack at least 230 items per hour, up from 160.

Sometimes after he gets off work at 5 p.m., he said doesn’t have enough energy to take a shower and just goes to bed with his shoes on.

He has to work six days a week, 10 hours per day, to help with the holiday rush, and is constantly pressured about his pace. He wants management to reduce the pressure on workers. When he first started the job, he was praised by managers and “everything was good.” But not anymore.

The December rally drew a large crowd of East Africans, union members and community supporters. They chanted, played drums, prayed, and got words of support from Congresswoman-elect Ilhan Omar, who is the first Somali-American ever elected to the American congress.

The protest began at about 3:30 p.m., and the growing crowd cheered as Amazon workers walked off the job shortly after 4 p.m. 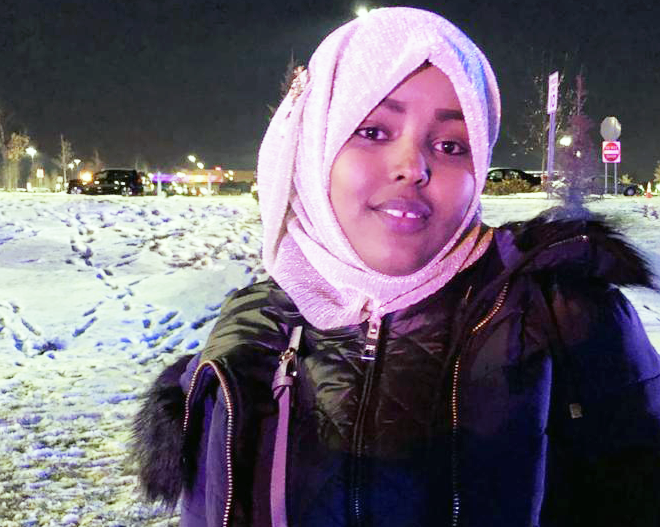 Khadra Kassim, 31, spoke at the protest, telling her story about almost having a miscarriage after lifting a heavy box at Amazon

Khadra Kassim, 31, has worked at the warehouse for 18 months. She spoke to the crowd about how she almost had a miscarriage after lifting a heavy box and passing out. She said she went to the health office for help, but didn’t get any. Nobody called an ambulance; nobody even called her husband, she said.

At one point, the crowd headed toward the Amazon building. About a half-dozen Shakopee police cars swooped in to prevent anybody from entering the building. The protesters chanted things like “We’re humans, not robots!” as a 5 p.m. shift ended and Amazon workers exited the building.

“It looks like we are moving forward, but I think very slow,” said Jaylani Hussein, executive director of the Minnesota chapter of the Council on American-Islamic Relations (CAIR-MN). “I think it’s just a question of seeing if Amazon is interested in actually solving these problems.”

The $220 million, 820,000-square-foot Amazon warehouse (the equivalent of 14 football fields) is one of over 100 fulfillment centers in the country. Amazon says it has paid more than $84 million in wages to East African employees. The monster company claims it has invested over $900 million into Minnesota’s economy since 2011.