Paul Vienneau, successful Halifax photographer aka “the asshole with a shovel”

PAUL VIENNEAU IS THE “ASSHOLE WITH A SHOVEL”—and damn proud of it.

Paul chose the name for himself in 2015 when the foul winter weather in Halifax turned him into a very public and very visible disability rights activist.

One huge snowfall after another that year made it next to impossible to move around in Halifax. City sidewalks and crosswalks were barely passable for anybody—never mind people like Paul who needed a wheelchair to get around.

Paul made several calls to the Halifax public works department to try and get action on clearing the crosswalks. The calls made no difference. That’s when Paul took direct action. He grabbed a shovel and went out and started clearing a crosswalk on one of the busiest intersections in downtown Halifax.

Many people stopped to help the one-legged man in a wheelchair hack away at the ice hazards underfoot. Many more thanked Paul for taking action. One or two brought him hot coffee.

Over the winter Paul went on to break up the ice at 25 different Halifax locations.

He went on social media to become “the asshole with the shovel.”

Paul says the name was a deliberate choice. He didn’t want city workers to think he was criticizing them and he wanted to accept with pride a name he knew others would be sure to call him. He easily convinced many Halifax people to appear in a video he made to explain and celebrate his own particular approach. 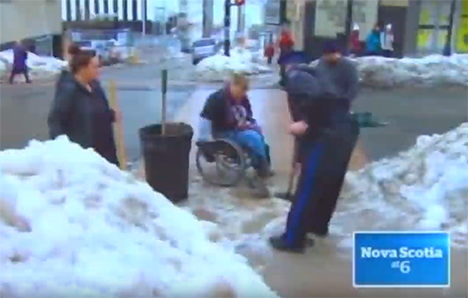 Many people stopped to help Paul clear the way

Not an ‘Oprah moment’

“This was never about fuck the mayor or the workers [are] lazy,” said Paul. “I spent my adult life complaining about shit. I decided to do this in a non-Oprah, inspiring way. Just go out and take control over a small part of my block.”

“It’s not a citizen’s job to clean the streets, obviously,” Paul says. “But when things are extraordinary, people need to go out and do extraordinary things.”

Paul has never looked back. He is now a tireless advocate for people who live with disabilities. What’s more, he gets results.

“We’re not looking to be served. We want to be enabled by the system. It matters to us that our voice gets heard,” said Paul.

Paul was recognized for his effective activism with the 2018 James McGregor Stewart Award. The award recognizes leadership, effective advocacy and outstanding personal achievement of a person with a disability.

“My whole point of this is obviously not to get awards. It’s because I was presented an opportunity three years ago with the whole shoveling Spring Garden Road crosswalks. It opened doors so that I could try to make some change on behalf of people from my community,” he said.

Paul has gone on to help The Pavillion, an all-ages music venue owned by the city, become an accessible venue with ramps.

Paul takes the bus to his photography business every day. He is currently working on projects with Halifax Transit on new tie-down systems, to make it safer for wheelchair users to take the bus.

‘Given enough time, we all become disabled’

December 3 was International Day for Persons with a Disability. Paul marked the day with a post to the Nova Scotia Advocate (nsadvocate.org). What follows are excerpts from that post.

“One day a year amounts to a nice gesture, but I hope is it is an IOU to the future, a time when disabled people will be as non-remarkable as any other citizen, when our requirements aren’t called special needs, but simply, needs.

“I often hear councillors speak of how they need to view issues through a “disability lens.” This means that disabled citizens get involved, that we get to hold the lens. Let’s face it, from straws to drive through bans, the able-bodied love to tell disabled people what they can do without.

“Disabled people should be living in the community, in homes where they are able to hire and self-direct their own attendant care. The government should pay for this. The ongoing social cost of segregating an entire class of people is so much more than the cost of enabling them to live the kinds of lives able-bodied people take for granted.

“Keeping us in inappropriate places is a remnant of the old days, when we were stockpiled like old firewood, biding our time until we died.

“We disabled people need to get involved and self-advocate. Sitting back and waiting for things to change results in disappointment.

“I say, don’t just be the change, start the change.”

Please let me know if you would like to do an update. I have had a position as the CAO’s Accessibility Advisor for the last year, and have an event I created to demystify disability and humanize disabled folks, called disXhalifax.
And thanks to who wrote this. Well researched and pretty bang on. <3